One of the best things the OOS board gets to do is to  help foster interest in birds by Ohio’s young birders. We offer scholarships for young birders to attend birding camps and conferences. In June of last year, we received a request from Adrianna Losey to sponsor her visit to Hog Island. As part of the requirements, we ask that the recipient give a report on their experience. Following is Adrianna’s experience.

This summer I attended Hog Island’s Coastal Maine Bird Studies for Teens Session One with the help of the Ohio Ornithological Society. The camp was held June 11th through the June 16th. It was held on Hog Island in Bremen, Maine. There were 20 other young birders aged from 14 to 17 attending the camp. Hog Island is in my top 5 birding experiences and I hope I will never forget it.

On June 11th we arrived at the dock early afternoon. My parents and I rode over to the island and got checked in. We birded a little bit and during that time I got a lifer, Black Guillemot. My parents left, so I went to socialize and bird with other young birders. For the next few hours, we did get to know you games and just hung out a couple young birders and I walked down to the beach and saw a Common Eider, another lifer. After that, we had dinner and did some more getting to know each other activities. Our final activity of the night was to go owling. We weren’t having much luck until the end of our walk. We tried one more time for Northern Saw-whet Owl and we were successful. We headed back to our cabin and called it a night.

On June 12th we woke up at 5 am. We went on an early morning bird walk highlights were Winter Wren, Northern Parula, and Black-throated Green Warbler. Today would be another kinda get to know each other day. We did a shakedown cruise after breakfast. We saw Common Eiders, Bald Eagles on their nests, Surf Scoters, Black Scoters, and more Guillemots. We went back to Hog Island for lunch and then a walk around the island. We didn’t see a ton of species but it was so beautiful. Afterwards, we had dinner and went to the nightly talk. On this night Dr. Stephen Kress talked about Eastern Egg Rock Island. He talked about how they would bring puffins from Newfoundland to Eastern egg to try to increase the declining population in the United States. He did this for over 20 years before it was a success. Now there are over 100 pairs of puffins on Eastern Egg Rock. After his talk, we called it a night.

On June 13th we woke up at 5am. We went on another early morning bird walk. We ate breakfast and then headed over to the mainland where we would spend most of the day birding at three different locations. McCurdy pond road was our first stop. We saw 26 species, including 10 species of warblers and 1 life bird for me, Ruffed Grouse. The Ruffed Grouse was very cool even though we got a brief glimpse. Our next location was Great Salt Bay Farm Wildlife Preserve. We had 33 species including, Bobolinks and one of my “nemesis birds” Alder Flycatcher, life bird #4 of the trip. We ate lunch and then headed for our last birding location on the mainland, Hidden Valley Nature Center. We had a total of 25 species of birds. Highlights were Broad-winged Hawk and an Ovenbird nest! We headed back to Hog Island where we had social time and dinner. We then watched the nightly talk.

On June 14th we would be going to Eastern Egg Rock, the day everyone was overly excited about. Eastern Egg Rock is a 7-acre island about 7 miles out We had our normal morning routine then headed for Eastern Egg Rock. The boat ride was about an hour long. Before we landed we circled the island. We quickly got Atlantic Puffin, Common Tern, Arctic Tern, and Black Guillemot. We landed on the island and we were greeted by the interns. There are 5 interns that live on the island in the summer. The interns stay on the island during the puffin nesting season. There is a small building (The Hilton) where they keep supplies and food, there is an outhouse, and then each of the interns has a tent. After meeting the interns and learning about what they do, they sent half the young birders out to blinds, and the other half would be working on a service project. I was part of the first half. The blind I was put is was the “Southie” blind. There were 3 Arctic Tern nests close to my blind, which was very cool to see. Other birds with nests/borrows near my blind were Common Tern, Black Guillemot, Atlantic Puffin, and Common Eider. Roseate Terns were also around my blind but they rarely stayed still. I was able to get a photo and report it to the bird banding lab. 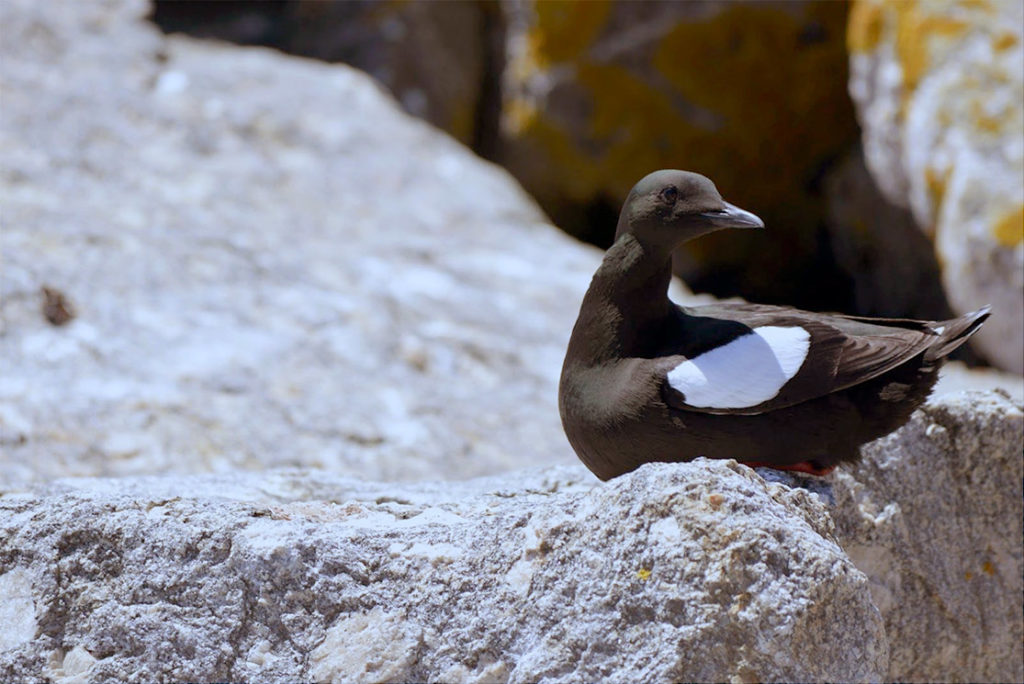 After staying in the blind for a couple hours it was time to eat lunch and then let the others go to the blind. As our group’s service project we cut back weeds so the interns can walk on the island without stepping on eggs/nestlings. After that the other young birders were still in their blinds, so 3 young birders and I sat on the roof of the Hilton where we watched terns and scoped out a Northern Gannet. After that, we thanked the interns and headed back to Hog Island. We ate dinner, had free time, and then went to the nightly talk.

June 15th was the last full day of camp. We traveled to Burnt Island where we would be bird banding. We had the usual morning routine then headed out. We arrived at Burnt Island and started setting up nets. Throughout the day we caught Swainson’s Thrush, Common yellowthroat, Magnolia Warbler, Dark-eyed Junco, Red-breasted Nuthatch, White-throated Sparrow, and Black-throated Green Warbler. We also had a group of Red Crossbills flyover, a bird that I had missed every morning on Hog Island so it was quite amazing to see them. We headed back and had dinner and just enjoyed our last day together and hung out.
June 16th was the last day of camp. We all got up early and packed. People started leaving at 7am. Time to say goodbyes. My parents picked me up and we headed home. Last birds I remember seeing at the island were Purple Finches and Northern Parulas.

Hog Island is something I will never forget. I made so many friends that I still keep in touch with. I saw over 100 species of birds that were all amazing. I highly recommend it to birders. They have many different sessions you can choose from for all ages. Hog Island was one of the best weeks ever and I am very thankful I was able to receive this scholarship from OOS. Without it I wouldn’t have been able to attend the camp, so thank you!